This game was made for the Idiom Game Jam, with the theme "Leave no Stone Unturned".

You play as the last unturned stone in the kingdom, who has to fight back against the hands and their leader, Igor the Handsome.

The game features a unique artstyle with a handrawn feel.

Yes! Rock and roll. (damn you actually missed an opportunity to  have rock 'n roll music... but I guess it wouldn't have been as good as the opera we're treated to now)

- the art and animations (really nicely done! The only improvement I see is that the keyboard letters are a bit too hightech to fit in)

- even though the gist of the game is its gameplay, there is still the story that also gets wrapped up with an ending screen after you've defeated the boss

- the complete combat system (both the rolling to engage and the keyboard letters within a certain timeframe) feels innovative, and I especially like it because the choice was made to make it like it is now instead of going for more standard alternatives such as 'press button to attack/shoot' and take enemies out that way. You have to look for a clear path where you can roll.

- that there is both music and soundeffects. Really adds to the game as a whole.

- small details (such as the fact that igor is brought into the screen by two hands) (btw, hands that place severed hands? That's severely disturbing. I don't use severed hands to look for keys. ... ... Well anyway.)

- you get hit quite easily when enemies come from below, even when it seems you're still in the clear.

- when exiting a successful fight, it's possible to immediately get hit by another enemy. Although this means you try to split enemies up and don't just roll into a group, it can feel a bit cheap.

All in all it's a really nice, complete little game. A winner for me!

... Can you believe I forgot to record my score a second time. It was somewhere in the 6000's though, I guess I was too embarrassed to remember it. 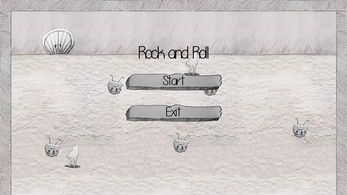 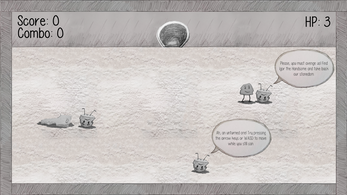 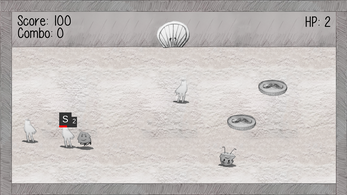 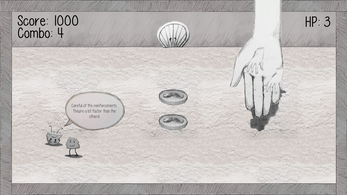